Referred to as the RNEW Student Residences, the residence halls can house 311 students. The Academic Building features a 600-seat lecture hall, classrooms, and faculty and administrative offices. The Town Hall supports gatherings of up to 275 people, while also opening up to a new civic plaza that enables indoor/outdoor activities. The Academic Building was designed to achieve LEED Platinum certiﬁcation under the newest LEED v4 BD+C requirements.

The project’s overall intent was to renew the College as a vital living/learning community, expand on-campus student housing capacity, and address campus wide academic priorities identiﬁed by UC Santa Cruz. The University also wished to honor the legacy of architect Charles Moore, who served as the original architect for the Kresge College Campus when it opened in 1971. The design of the new buildings reﬂect Moore’s integration of asymmetrical architecture, which is typiﬁed by the use of contoured angles and curves. This approach is exempliﬁed by the smooth curvatures of nearly all sides of the new Academic Building, which utilizes a curved cross-laminated timber (CLT) roof diaphragm. The buildings also showcase his love for bright color palettes, which are reflected on both the exterior and the interior of each building, along with his innovative approach to lines of sight. In doing so, the new buildings complement the existing structures and sustain the spirit of Moore’s original design.

The RNEW Student Residences are the first cross-laminated timber (CLT) structures at UC Santa Cruz and one of few CLT student housing structures in the United States. At roughly 5,550 square feet per floor, the six-story buildings utilize a unique combination of structural systems. Each building sits atop a two-story concrete podium. The upper four floors utilize CLT construction throughout, including prefabricated light wood-framed bearing walls and shearwalls, glulam beams, and CLT floor and roof decks.

In addition to serving as general contractor, Swinerton Mass Timber (now Timberlab) took on delegated design and strategic procurement for the timber system. For each building, Swinerton performed all design coordination and modeling services. Timberlab performed all detailing and fabrication for glulam columns and beams from their facility in Portland, Oregon. In-house fabrication signiﬁcantly broadened procurement options, as the far majority of manufacturers in the Northwest region do not have fabrication capabilities. Timberlab was therefore able to choose which manufacturer provided the best option from budget and procurement standpoints, while also allowing material to be obtained from multiple manufacturers for separate portions of work.

Timberlab selected Zip-o Laminators, a certiﬁed glulam manufacturer and trusted partner whom Timberlab has teamed with on several mass timber projects, as the supplier for Academic Building A. Timberlab purchased material from Zip-o and then fabricated it in-house, which signiﬁcantly contributed to meeting the schedule.

Having in-house coordination and modeling services provided another major beneﬁt. As the VD&C engineering team, fabrication team, and onsite construction team were all part of Swinerton, there were clean and seamless lines of communication. This vertical integration proved highly successful, as the direct line to the fabrication facility greatly mitigated schedule factors that would have been out of the team’s hands if they had been unable to perform. 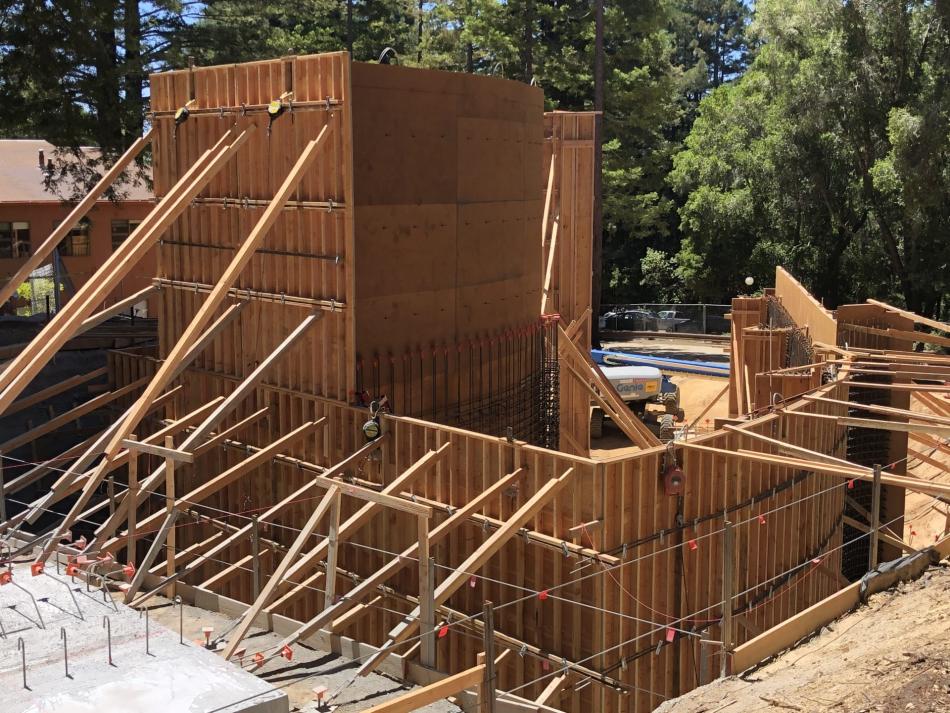 The Kresge College campus is highly constrained, with centuries-old redwood trees towering throughout the eight-acre site. Because of this, one of UC Santa Cruz’s motivations for utilizing mass timber was to minimize the footprint of the project. As such, prefabricated and modularized mass timber construction was a perfect match for the project, as much of the work could be built offsite. Unlike classroom or office buildings, residence halls only need a few hundred square feet of space per dorm. By utilizing prefabricated walls and modularized components, the team was able to efficiently place them in and then lay CLT on top. As the entire footprint was surrounded by redwood groves, there were strict regulations on which trees could be removed. To overcome this significant challenge, each building was specifically sited in adherence to regulations. They were also designed to minimize tree removal by bending around important groves and nestling into the adjacent topography. As an example of how close these trees were to the footprint, branches were being moved out of the way as the CLT was being set. Vertical construction then started within feet of the trees.

In order to preserve the redwoods, the team created a Pointcloud model of all of the trees onsite. In doing so, they knew exactly where each crane could be located to avoid any damage to the trees. Their ability to utilize this technology also allowed them to account for things such as mitigating forest canopy damage through intentional design and construction methods. 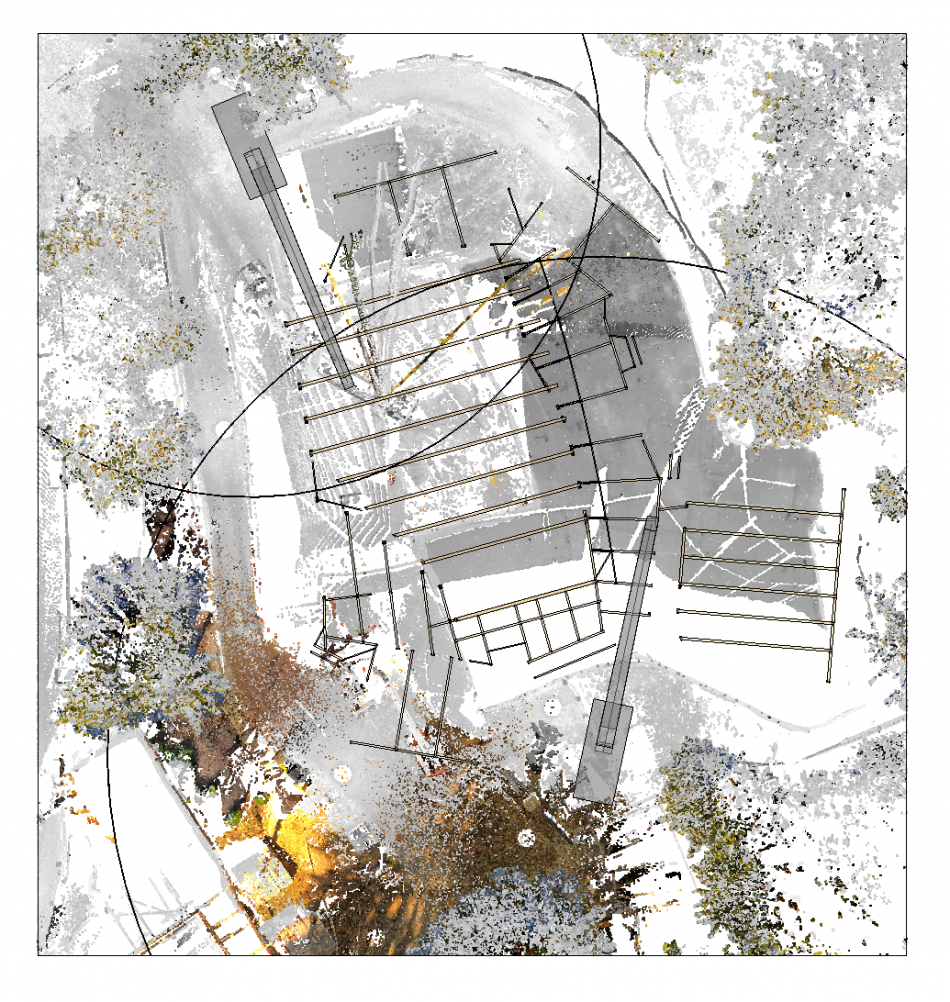 Holmes served as the Specialty Structural Engineer of Record under Swinerton Mass Timber for the timber structure throughout the three RNEW buildings and the Academic Building. This included the design of the CLT-paneled roofs, floors, and supporting glulam beams. Their structural and fire engineers collaborated with Swinerton to maintain optimal CLT exposure throughout these buildings. Some key solutions allowed the warmth of the wood to be showcased through diaphragm undersides and glulam beams, all while achieving the required fire ratings and maintaining structural integrity after any fire-induced char.

Careful detailing minimized beam-to-column and column-to-floor connections with hidden fasteners, creating the illusion of floating glulam columns. For beam-to-column connections, Ricon connections recess into the beam concealing hardware. Base connections are drilled underneath the column and grouted to a rod, fixed to the floor with gypcrete encasing the column. Glazing attachments directly point back to the timber structure.

One of the most difficult preconstruction challenges came as result of the project being performed under the design-build delivery method. While there are always challenges inherent in this model, the timber was procured as a hard bid lump sum commitment. This commitment, however, was based on a fully delegated set of drawings. As such, Swinerton had to provide estimates for a building that hadn’t been designed. Although constructability feedback was later provided to the design team during early preconstruction meetings, very little info was available when the documents were bid, leading to change

Swinerton and Swinerton Mass Timber were brought on board during the very initial phases of the project. This allowed them to coordinate delegated design with design teams, engineers, and MEPF trades. As a result, Swinerton’s in-house Virtual Design and Construction (VD&C) group performed extensive BIM modeling and coordination during preconstruction. The coordinated efforts during design, planning, and fabrication proved to be highly beneficial for the project team, as it helped to resolve issues and proactively control project delivery. In the end, the team completed the design in approximately three months and released materials for fabrication.

The utilization of modular CLT construction differs greatly from a typical lightwood framed residential Type V building.  With residential podium-style buildings, the stick framing walls are built onsite. This is followed by the installation of the joist system and the floors. Penetrations are then made in the field, which can be routed through the joists and/or wall cavities. On this project, however, all of that took place in a virtual environment prior to modular fabrication, detailing, and installation.

In this case, the prefabricated panels included shop-cut penetrations. The prefabricated components were designed to 1/16”, with everything coordinated before it was cut. As components are always precut to exact specifications, there were extremely few field errors. The utilization of CLT assisted in quality control as a result, while also helping to accelerate the field installation schedule.

The components were manufactured with specifically tailored dimensions. This directly benefited the field installation sequence, as the components were immediately ready to be installed upon being delivered onsite. The panels were then lifted by crane, which allowed installers to finish roughly half a floor each day. As the CLT installation also generated very minimal waste onsite, its low environmental impacts will help achieve the project’s LEED Platinum certification. 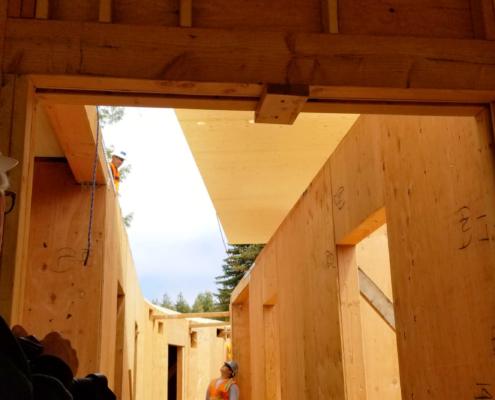 VD&C coordination during preconstruction was highly critical for the hundreds of MEPF penetrations in the prefabricated wall panels. The goal was to have everything prefabricated and cut specifically for each modular component with all of the penetration locations already in place. In doing so, each component could be picked up straight off the truck upon arrival, installed exactly in the correct location in the building, and be immediately ready for rough-in.

On most projects, it typically takes two days per floor to make MEPF penetrations. Until this portion of work is complete, construction cannot continue. Thanks to having the penetrations already coordinated and built into the panels, it only took one day per floor to tie them into the new MEPF systems. By expediting this process, it allowed for trades to begin the interior buildout much more quickly.

As CLT is a large-scale, yet lightweight prefabricated wood panel, it can accommodate complex building shapes. This level of design flexibility is not available to the same extent as traditional structural systems. As a result, the use of CLT greatly influenced the fluid architecture developed by the design team. For example, smooth curves exemplify nearly every side of the Academic Building, which is highlighted by a curved CLT roof diaphragm. As these curves required no onsite engineering, it greatly assisted in improving the schedule, budget, QA/QC, and risk factors. 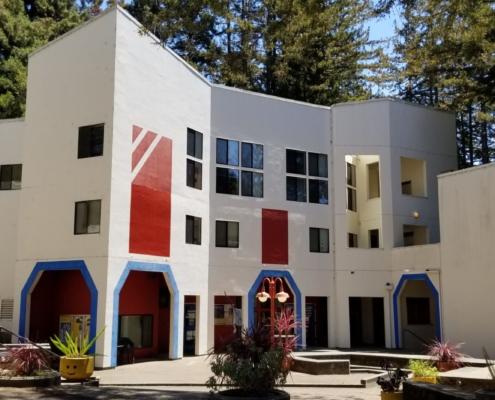 During construction, the team implemented one of the newest advancements in layout technology. Utilizing Dusty Robotics, the “robot dog” assisted in benefiting the budget, schedule, and labor costs during the process. For example, each layout typically takes two laborers working for two full days. Instead, a single Swinerton team member worked with Dusty Robotics to perform the layouts. He was able to complete each layout in six hours during a single day. As a result, it took zero labor hours for layout, while also allowing other activities to be performed concurrently that would not have been possible with the traditional layout process.

The utilization of mass timber construction was directly responsible for the success
of the Kresge College project at UC Santa Cruz. Its beneﬁts were present at every step of the way, beginning on the ﬁrst day of award. For the next three months, Swinerton performed an extensive amount of preconstruction services. Without the capability to provide these services, it would have been unfeasible to utilize a CLT structural system. It was also greatly responsible for their ability to maximize the beneﬁts of offsite modular construction.

No other ﬁrm could have provided the University with the same expertise. As a whole, Swinerton provided delegated design, strategic procurement, design coordination, and VD&C modeling services, while Timberlab utilized their full capacity to perform procurement, fabrication, and detailing services. This allowed everyone to work directly in-house—including fabricators, detailers, VD&C engineers, self-perform concrete personnel, and onsite construction members—as a single cohesive unit. With no middlemen, the lines of communication were seamlessly integrated as one.

The team also employed new technological advances to support the project. Whether it was using Pointcloud to determine where to place the cranes in the redwood groves, or using their trusty “robot dog” to streamline layout activities, they took every opportunity to ﬁnd new ways for improvement.

Whereas some can’t see the forest for the trees, Swinerton surely did not see it this way. In the end, they are proud to have showcased their ability to perform such a wide-ranging breadth of roles on the project. By demonstrating to UC Santa Cruz that they can provide more than just general contracting services, they feel confident that their work at Kresge College will lead to future mass timber projects of a similar nature.